The Palamau Tiger Reserve is located in the western side of Latehar district on the Chhotanagpur plateau in Jharkhand.!

The forest is surrounded by the Netarhat Forest in the South, Auranga River in the North, Latehar Forest Division on the East and Garhwa Forest Division and Sarguja District of Chhattisgarh on the West. 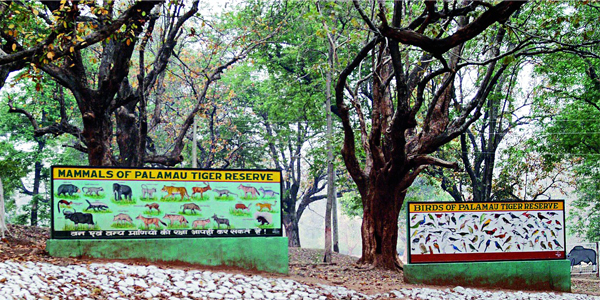 The Palamau Tiger Reserve is very important for its biodiversity. The project area is constituted mainly of Sal forests, mixed deciduous forests and bamboo groves. The reserve zone is the watershed area for 3 important rivers Koel, Burha and Auranga.

The scientific management of the forests had started as early as 1864 and over the years, large forest areas were notified as reserved forests, protected forests, wildlife sanctuary and national park. The forest is spread over an area of 1129.93 sq.km., of which 414.08 sq.km. is marked as core area (critical tiger habitat) and the rest 715.85 sq.km. as buffer area. Of the total area, 226.32 sq.km. is designated as Betla national park. In the buffer zone, 53 sq.km. is marked as tourist zone. This entire zone is under the administrative control of Chief Conservator of Forest & Field Director, Palamau Tiger Reserve. Under whom, there are 2 divisional forest officers each for core area and buffer area Forest Division.

The Palamau Tiger Reserve was constituted in the year 1974 under PROJECT TIGER. It is one of the first 9 tiger reserves created in the country at inception of ‘Project Tiger’. Palamau Tiger Reserve has the distinction of being the first sanctuary in the world in which a tiger census was carried out as a pugmark count, as early as 1932 under the supervision of J.W. Nicholson, the then DFO, Palamau.

The present day core was important bamboo and timber extraction area of Forest Department. The area was closed for grazing, timber and any type of NTFP collection. The extensive fire management, soil and moisture conservation measures were adopted. The wildlife management practices in the core area were also initiated simultaneously. The grass lands were created by removing the climbers. The waterhole management, artificial salt soil blocks, provisions and very strict anti-poaching mechanism with the help of local communities resulted in overall improvement in habitat and wildlife.

It is one of the first 9 tiger reserves created in the country at inception of ‘Project Tiger’, in India and the only one in the state of Jharkhand. The reserve forms a part of the Betla National Park. 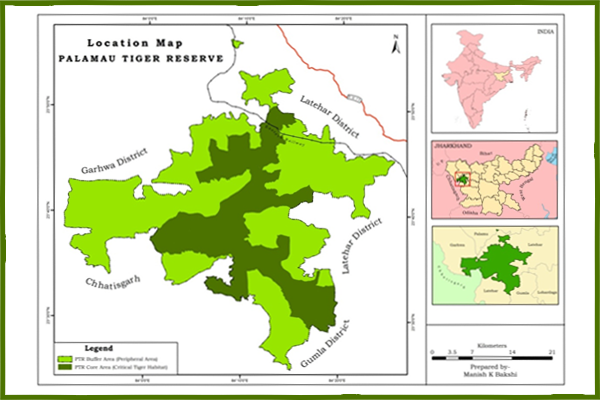 Flora as well as fauna in the forests under Palamau Tiger Reserve have been protected and conserved over the last 40 years. The keystone species are Tigers, Elephants, Leopards, Grey Wolf, Gaur, Sloth Bear, Four- horned Antelope, Indian Ratel, Indian Otter and Indian Pangolin. There are 11 Schedule- I species distributed in PTR among mammals only. In total, 47 species of mammals and 174 species of birds have been identified. Apart from these, a total of 970 species of plants, 17 species of grass and 56 species of medicinal plants have also been identified.

The terrain is undulating with several hills and valleys. This forms several primary and secondary level streams in the area. The elevation ranges from 200 to 1700m MSL.

Palamau Tiger Reserve is drought-prone area due to rain-shadow effect. Most of the rainfall is received from the southwest monsoon. Mean annual rainfall is 1075mm. Rainfall is higher in the southern portions than northern portion. There are two perennial rivers- North Koel and Burha and many non-perennial rivers, streams and nallahs like Auranga, Satnadiya, Panchnadia, Kohbarwa, Aksi, Pandra ,Surkumi, Kotam, Chipru, Jawa, Charu etc. Many aquifers locally called ‘Chuan’ are also present. A sulfur hot spring ‘Tatha’ is present near Barwadih.

Palamau Tiger Reserve was established when India was introducing the famous Project Tiger in the year 1973 to save the endangered asset of our country. It was believed that with the introduction of this reserve the endangered species of tigers along with other wild counts would be preserved and cared under the Wildlife Protection Act.
Year ago before the establishment of Palamau Tiger Reserve, the management of these forests was highly commercial. There were some cattle camps and the area was open for grazing. The entire forest area used to be ravaged by fires every year with the unchecked activities of poaching. But today, the present area of the Reserve got duly constituted either as Protected Forest or Reserved Forest under the Indian Forest Act, 1927 way back in 1947.

The climate is typically tropical monsoonic type with four distinct seasons:
i. Winter: Mid- November to mid- February
ii. Summer: Mid- February to mid- June
iii. Rains: Mid- June to mid- September
iv. Autumn: Mid- September to mid- November
Winter temperatures can sometimes dip to 4º C. The summer season is very hot and dry and sometimes temperature can reach 45.5º C in the northern portion. The southern areas, being at higher altitudes and with denser forest cover, are comparatively moderate in summer. Frost occurs almost every year, especially in the grassy blanks, but usually it is not of a severe nature. The area is dry with very low humidity during March to early May. Depending upon the season relative humidity in the morning’s ranges from 68% to 83% where as it is 25% to 75% in the evenings.

Palamau Tiger Reserve offers around 40 furnished and well-maintained rooms that can be booked online through our
secure online payment option. 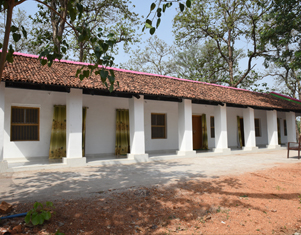 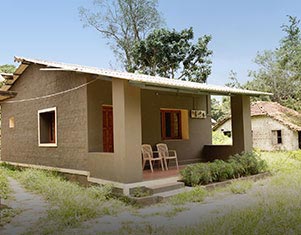